You are here: Home / Neighbourhood Plan 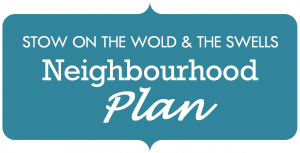 The Stow on the Wold & The Swells Neighbourhood Plan is a

What is the Neighbourhood Plan and who is drafting it?

The Neighbourhood Plan (NP) is a planning document that sits alongside the National Planning Policy Framework and Cotswold District Council’s Local Plan. It is about identifying developments and land use that are needed to address social and economic issues that are identified through evidence gathering and community engagement.

The NP is being drafted by the Neighbourhood Plan Steering Group (NPSG) consisting of six community representatives, three Stow Town councillors and one councillor from Swells Parish Council.

Several other community members have volunteered to help the NPSG with specific tasks and they are called Community Plan Champions.

Based upon the results of the Household Questionnaire results the Neighbourhood Plan Steering Group proposes a vision of Stow in 2031 and beyond.

What draft policies are being considered and what will they achieve and why?

The Neighbourhood Plan Steering Group (NPSG) established four groups to develop objectives and policies for the new draft Neighbourhood Plan (NP) based upon the evidence it has collected. The four groups consisted of two members of the NPSG and at least two other Community Plan Champions representing the wider community. The groups considered policies on affordable housing, access and parking, sport and leisure and economic development.

A draft Community Design Statement has been prepared by the Stow Civic Society. It describes the qualities and characteristics local people value in their environment and sets out clear and simple guidance for the design of all development in the area. It is used to influence developers, ensure that new buildings respect and reflect local character.

Which sites are being considered?

In March 2020, the community was consulted on the possibility of development occurring on eleven sites. All the sites are outside the current development boundary and none of them is currently identified for development. The Neighbourhood Plan Steering Group (NPSG) completed an assessment of all the sites which were shared with the community at three drop in days together with site location plans. The community was offered an opportunity to give their views on the different sites.

The NPSG established a Sites Sub Group (SSG) consisting of Cllr Maggie Deacon and two community representatives supported by Stow Town Council’s Clerk. The Clerk has written to all eleven landowners and where the landowner expressed an interest in doing so the SSG has met with them or their agent to discuss the development needs identified by the community and whether their site might be made available to meet that need.

An important context for those discussions was the NPSG draft policy which confirms that support would only be given to developments that are led by the needs of the community and would not be given to developments whose primary purpose is market housing.  Similarly all affordable housing must continue to be available as a community affordable asset in perpetuity. Any market homes needed to make development schemes viable must be subject to a covenant or legal agreement that they can only be sold to permanent residents and not used as second homes or for private rental.

When will the Neighbourhood Plan be finished?

It is not easy to give a precise date as to when the whole process will be completed as once a new draft Neighbourhood Plan (NP) is approved by Stow Town Council and Swells Parish Council as there is a long process of consultation and approval with the community, Cotswold District Council and other statutory consultees. In addition the NP will be considered by an external examiner.

At present the Neighbourhood Plan Steering Group (NPSG) is working on a timetable to complete the new draft NP in March 2021 which will be followed by a six week period of consultation with the community. If this is achieved then the community referendum which is the final act in approving the NP will take place in late 2021.

Progress will be reported in Stow Town Council’s Newsletter “Stow Matters” and as new documents are approved they will be uplifted to this website.

How can residents and businesses influence the Neighbourhood Plan?

Residents have already influenced the Neighbourhood Plan (NP) by completing surveys and questionnaires giving their views on various issues. Similarly businesses have helped the Neighbourhood Plan Steering Group (NPSG) understand how changes in the age structure of Stow’s population has affected their businesses with challenges in recruiting employees and of parking for owners, employees and customers.

Community Plan Champions have been invaluable in giving additional support and feedback on the objectives and policies needed to maintain Stow as a vibrant and thriving town while protecting its environment.

Residents feedback on the new draft NP which is likely to take place between May and June 2021 will be critical in determining the objectives and policies in the final version. Finally, it will be the residents who will have the final say on the NP in a referendum and only if a majority of those who vote support the NP will it be adopted as a formal part of the statutory planning process.

All council and committee meetings have reverted to in person.  Please check agenda for location.  Members of the public/press are welcome to attend.

This site uses cookies. By continuing to browse the site, you are agreeing to our use of cookies.

We may request cookies to be set on your device. We use cookies to let us know when you visit our websites, how you interact with us, to enrich your user experience, and to customize your relationship with our website.

Click on the different category headings to find out more. You can also change some of your preferences. Note that blocking some types of cookies may impact your experience on our websites and the services we are able to offer.

These cookies are strictly necessary to provide you with services available through our website and to use some of its features.

Because these cookies are strictly necessary to deliver the website, you cannot refuse them without impacting how our site functions. You can block or delete them by changing your browser settings and force blocking all cookies on this website.

These cookies collect information that is used either in aggregate form to help us understand how our website is being used or how effective our marketing campaigns are, or to help us customize our website and application for you in order to enhance your experience.

If you do not want that we track your visist to our site you can disable tracking in your browser here:

We also use different external services like Google Webfonts, Google Maps and external Video providers. Since these providers may collect personal data like your IP address we allow you to block them here. Please be aware that this might heavily reduce the functionality and appearance of our site. Changes will take effect once you reload the page.